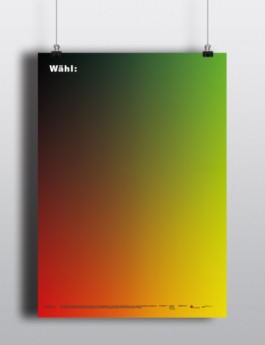 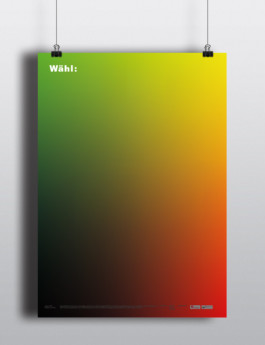 One of 30 winners of the Mut zur Wut - Award with more than 2200 received posters.

In September I worked on a poster series for the upcoming German federal election.
The goal was to increase the usually pretty low turnout in the Cologne district Kalk. The turnout during the state election of North Rhine-Westphalia in 2017 in Cologne Kalk was about 30 percent. The average in NRW was more than 65 percent.
To challenge this problem I wanted to raise the general awareness of the election debate, however, without being to direct. Moreover, I wanted to create a contrast to the usual posters of the political parties that were present all over Germany.

The result is a poster series with 4 different layouts. The main component is a colorful gradient, which represents all parties currently present in the goverment had a high chance to be reelected. Above the notable gradient, you can see the word "Wähl: " which means "vote: ". It should invite the citizen to vote for one of the many parties, which are as different as the colors of the gradient. To guarantee a neutral, impartial design I made a series of 4 posters where the gradient is turned by 90 degrees each time. Also, the colour gradients are supposed to represent the fluent textual transitions that exist between the parties and their wings.

During the days before the election, this poster was visible all over Cologne-Kalk.

The Posters were also exhibited in the gallery "Ausstellungsraum für Brauchbarkeit" (Gallery for usability) within the scope of the exhibition "Critical Kalk". This project was implemented in collaboration with the cologne-based NGO FROH! and the federal agency for civil education. 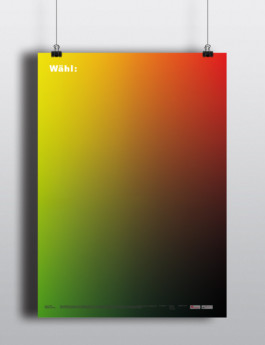 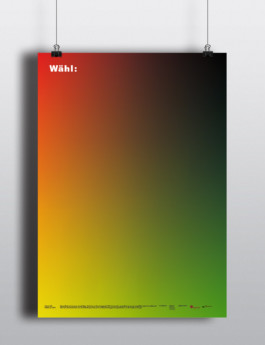 Services
I help organizations and professional individuals in sharing their achievements and visions with their audience.

With a <3 for typography